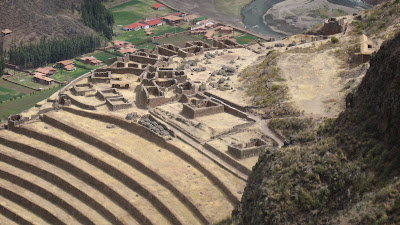 On Saturday, after a jog in the non-existent park I headed into town to bag as many museums as possible from my boleto. I visited a series of small art and history museums none of which had a great deal to offer. I found a Novatel for lunch with a mixture of French and Peruvian fare. This wasn't like Novatels I have experienced in France – it had a real air of luxury and near perfect service – I dined on a Peruvian club sandwich and local beer enjoying the peace of an ample courtyard with a closed but windowed roof.

After this I headed off to another ruin, Quento, but got lost on the way and stumbled on The Temple of the Moon. This included a dark cave with an opening to the sky where the moon shone at certain times and an enterprising youth hid in the dark and frightened me as I entered. I chatted a while with a French Canadian girl who had arrived with a guide by horse and then found my way to Q'uenco. This included a large stone hill that had been bisected with zig-zag passages that offered opportunities to explore.

On Sunday I took a bus ride int the Sacred Valley, to Pisaq. The bus was full and I had to stand both ways but the round trip of almost an hour each way only cost 40p. First we climbed about a 1.300 feet before descending a further 2000 into the valley. An elderly man with poor vision sang for tips. Arriving at Pisqa the Sunday market dominated the small town and apart from the usual stuff you could see the baking of bread in a large wood fired oven and view the cuy (guinea pig) in both their cute and edible forms. Keeping faith with my family I opted for vegetable soup, and then set off for about an hour's steep climb to the ruins, a hill top Inca citadel. The Sacred Valley is phenomenal. Through it runs the Rumbamba river. It is surrounded by mountains, some of which are neatly terraced for cultivation. At its base there is a large flat and fertile floor. The ruins are extensive but were spoilt somewhat at weekends by bus loads of kids that had come up via the road. One small group of young people insisted that I be photographed along side them – at first I thought it was some kind of scam but followed my instincts and I think they were just wanting to create a bit of Gringo interest in their photo collection. On the way down I met a Spanish Crystal Palace supporter- he even had a CP hat – how strange!

Finally I returned to the village for crepes and Ice cream and the whole day out, including some beads that I allowed myself to be persuaded into buying cost only 33 Soles or £5.50!

Looks impressive and did you keep the pancho and sombrero? My Mexican aunt once bought me a sombrero and it stank horribly - don't know what it was made of!

Well thanks for keeping us posted on all your adventures - I've had some adventures of my own after landing a short term contract at the National Archives - the learning curve has been vertical as I have to understand the several Acts (including Freedom of Information) that relate to the project I'm working on - who knows for now I work in the cabinet offices from time to time, next no 10! Never a dull moment here...take care, Liz

Thanks for the comments Liz - glad you found work. No I don't envisage waering panco and sombrero in London!