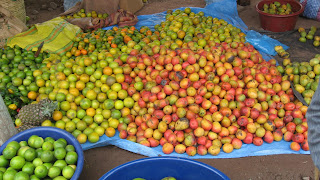 Friday night is poker night in South American Explorers so I joined a group of about 8 others and although I had some winning hands I lost my stack which amounted to £5, had a few beers and finished the evening chatting with a David the Perú representative for Imaginative Explorations a Suffolk based , He is from Granada, Andalucia and we shared the equivalent of a Macdonald's type meal at the Peruvian equivalent, Bembo's. Earlier I booked a river rafting tour for Sunday for $40 inclusive of transport, wet suits, lunch etc. It promises 2 hours of rafting at level 3 on the Ruambamba and it is raining now so I guess the water will be quite fast.

Saturday Morning we got up early and I accompanied Ivette, our director, Sonia our cook and her sister to the Huancaro Market. The market is huge and we focused on the vegetables and fruit buying for the week. Ivette turned out to be in her element. She is a vegetarian so was quite excited by all of this and loved haggling with the vendors. We bought all kinds of veg and fruit, soya flour, cheese and I bought some coffee and very weired fruit that looks like a giant string bean and contains fruit covered pips. Eventually we turned to fish and meat and I bought some John Dory Steaks and chicken breasts. The chicken part of the market was a bit gruesome because the live chickens are slaughtered, bled, blanched, de-feathered and then laid out ready for purchase.

We bought some chicken breasts which were filleted for us there and then. Finally we took a taxi back and I had a siesta and the others reviewed the purchases.

On Sunday Morning I met up with 3 others in the Plaza and we took a nice bus towards Puno for nearly two hours. My companions included a post grad couple from Oregon and a guy of about my own age from Bristol. We seemed to get on well and on reaching the the river we took group photos. (I will add these when I receive them from my companions)

River rafting is new to me. Freddie, our instructor was at pains to ensure we were properly prepared and in the first few minutes taught as the 6 key instructions, “forward, back, right back, left back, stop and inside”. We practised these and when we met our first rapids, level 1, he shouted “forward tigers” and we paddled for our lives. The river gave way to increasingly severe rapids and by level 3.5 the front of the raft was being submerged and we were dropping several feet over walls of water. It was great fun and quite exhilarating. At one point I was thrown out of the raft but got back in again in only a few seconds. By the end we had gone some distance for nearly 2 hours and we eventually joined the road to be met by our bus and finally to enjoy a relaxing roadside picnic lunch.

In the evening I chilled out at the Real McCoy a British restaurant where I had steak and onion pie, mashed potatoes and a Cuzco beer called Perkas which was really worth drinking. I also invested 5 soles and bought the Comercio Sunday paper which is like the Sunday times or Observer and has several sections to read including some world news and magazine sections on arts and body & mind. A great and peaceful conclusion to the weekend.

Machu Pichu is on the cards for next weekend.