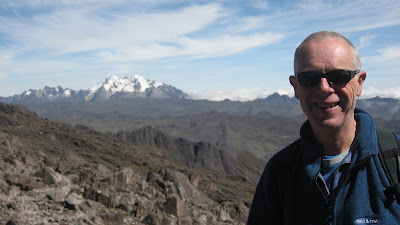 This was a 2 day walk organised by my school from just beyond Urambamba in the Valle Sagrado at 2,870M to Lares Balinearios (hot springs) taking a mountain pass at 4,900M to Valle de Lares and eventually by tourist bus back to Cuzco.

We set off from the school just after 6 am in a luxurious bus, 4 students and 1 teacher/guide. From Urambamba we took a track a further few kilometeres to where we met Paulino and some of his family. He brought a number of small horses to carry our packs, tents and food and one horse for Tammy who was suffering with some blisters, so walked some of the way and rode some too. Tammy is tall, about 6 feet and the horse was small so she was both concerned about its strength to carry her and how it looked.

We walked some way, always climbing and following a fast flowing stream along attractive wooded paths. On the way we met two children who told us that they traveled 2 hour to and from school each day. After some time and a bit of a rest we were joined by two others, a young couple from USA who were going the same way so we teamed up for company and continued on. We passed a number of sights including Inca ruins and waterfalls and we always had a spectacular view of the Sacred Valley receding behind us.

Eventually we reached some woods high in the mountains where we made camp, cooked and lit a fire to keep warm. That night was beautifully star light but freezing and we awoke to a ground frost, cooked breakfast and set off for the high pass at 4,900M just after 7 am. On reaching it we were greeted by spectacular views of the snow capped mountain range beyond, with the cloud base below where we stood. At the top was an Inca a shrine where we laid stones collected from the river below, one for each of our loved ones, for each of whom we made a wish.

We then began to descend and passed sparkling lagoons and mountains with small glaciers. On reaching a village about 1000M below we stopped for lunch in some school grounds and chatted to some children offering them sweets which we had brought for that purpose.

Eventually, at around 3 we reached Lares hot springs where our Portadoras had set up our tents. We swam and bathed in the springs and enjoyed a meal in a small open air restaurant which was close by. The next morning after some further bathing and breakfast we were collected by a tourist bus and driven some 30 kilometres out of the Lares Valley along some white knuckle track with steep drops below, finally returning to Cuzco for lunch.

This was a spectacular walk with some of the best views I have ever seen. We were a companionable group and all felt the journey of some 35Km had been very worthwhile.