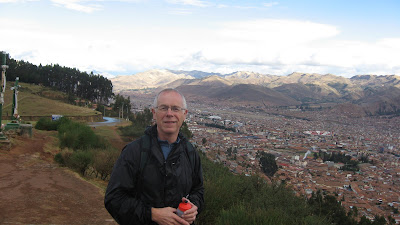 Yesterday as part of my class I was taken to a great market and saw all kinds of interesting produce including many different types of maize and beans. My teacher chatted with the stall holders and they were all very courteous and helpful. After that I joined South American Explorers, a not for profit organisation that helps travelers with information on planning their journeys. It seems like a nice place to hang out and has wireless which is the real reason I wanted to check it out. On Thursdays there is a open meeting, the next one explaining about Quechua which is the indigenous language – so I may go along.

As my body becomes acclimatized to the altitude I begin to feel more able to check out the various opportunities and possibilities. Last night's attempt at salsa left me in no doubt that my talents lie elsewhere. There was a group of 20 somethings and me and most of them had done it before. The teacher was quite patient and Macdud, my partner from Holland was really kind but I didn't get beyond the basic step which I had forgotten by the time I got home – still, trying something out for free several thousand miles away has something to recommend it.

Today, after class I walked up a steep path to see some Inca ruins called Saqsaywamán – this sounds a bit lie sexy woman so is easy to pronounce. I couldn't get in due to not yet having bought a 10 day pass for various sites – a silly rule considering that many people only visit for a day or two. However, I could see much of it from he next hill to which I had diverted to see massive white statue of Christ and with a great outlook on the city where was able to take some nice photos. On the way down I stopped in a posh hotel fo hot chocolate and was impressed by some life size stone puma heads in the lavatory which were really taps above the stone sinks. On my way back there were some young traditional dancers practicing in the Plaza near where I live where earlier there had been a Nestlé tent offering free nutrition consultations to he local people – this seemed like highly debatable multi-national activity but I suppose not surprising.

Well Cuzco came alive today with bustling streets dodging cars and every kind of street vendor and tienda. Police of different types congregate on corners, shoe shine boys line the pavement eying your feet, elderly indigenous women sell chicken soup or bread from their blanket covered baskets and young girls sell telephone credit cards. There is an evident mix of the reasonably affluent and heartbreakingly poor. I saw a man walking on all fours with blocks of wood and knee pads to help him make his way alongside smartly dressed office workers and children in school uniforms.

The school made a cool welcome by setting me an examination and on completion the director of studies told me that I seem to have forgotten a lot of my Spanish! Ah well – I was assigned to my teacher Mariene and we spent a productive three hours covering quite a bit of ground and in an enjoyable way. I added my name to dancing lessons and short trek in the Sacred Vally but I understand these only happen if there are sufficient takers – there are other activities as well which include lectures and Peruvian cooking, so we'll see.

Finally today I managed to find an Internet café and was able to chat with my family and see them on Skype video – so now to my homework!

Posted by malarkey at 20:55 No comments: Links to this post

A bit of a mission

It is difficult to describe my journey I ways that are interesting – suffice to say that I survived its rigours and the result is I am now here in Cuzco and in good shape.

I now don't believe the hype by the UK airports about arriving 3 hours early for international flights. I got there to be greeted by a sign that check-in would open at 5 am for the 6.20 flight! I had arrived at Heathrow around 11.30 pm, courtesy of my family and touched by my daughter's tearful farewell. A long wait ensued.

Barajas airport, Madrid is very new and grand in every way so I enjoyed a relaxed and watchful breakfast then joined my flight for Lima. Two no-shows meant that they had to off-load some baggage and we consequently left an hour late, but we made up most of the time in a flight of 11 hours and 20 minutes. I was sat next to a very nice non-English/Spanish speaking Russian girl

who was joining her cousin to work in Lima and surrounded by some hyper-active children who had presumably been dosed up with tartrazine for before the flight! I was not impressed with Iberia airline – the flight attendants were diffident and lazy and information from the pilot was non-existent.

Lima airport was quite organized and as I emerged customs to a sea of meet-and-greeters who raised their placards in unison at my arrival - for a moment felt like a VIP. I identified my driver José and we went to find his car for a 40 minute drive across the city to my hotel in Miraflores. José was quite chatty but I preferred not to take his mind off his driving which was less than suicidal but fast and furious among the rush traffic. My eyes began to smart against the fumes as I marveled at his expertise in negotiating the tightest spaces when undertaking and overtaking other road users. We sped along the Playa on the Pacific beach and he commented that the water wasn't too clean!

We arrived at the hotel and after registration I ordered a hamburger and my very first Pisco sour. In consequence I slept well, until around 4 am and enjoyed a relaxed breakfast followed by a quick stroll around Miraflores noticing the dog walkers and hopeful car wash boys.

Leaving Lima was a more relaxed affair and José got me to the airport with the 45 minute journey costing about £7 each way. The airport was very organized and I joined my LAN flight and was further impressed by the flight staff who were without exception attentive and helpful, making an interesting comparison with the Iberia lot who seemed flight weary to a man. It did however seem curious that the LAN staff wore a USA badge showing that they spoke good English!

Arriving at Cuzco I was met by Cesar and transported to his town house with five levels where I have a great room with a panoramic view overlooking some houses and hills. I have been given lunch by Elizabeth his wife and told to rest and drink Mate de Coca to reduce the effects of the altitude. I am in the process of meeting the rest of the family and just now planning my siesta!

Posted by malarkey at 21:07 2 comments: Links to this post

One week to go

I feel quite hopeful for my forthcoming trip.

I have learnt that I will be staying with the ITURRI FAMILY: Cesar, (businessman), his wife Elizabeth (secretary), their daughters Vera Gabriela (21) dentist, Diana Valeria (8) and sons Cesar Andres (19) business student, Matias (9 months old). This seems quite an extended family but one that has good conversation possibilities.

I am a bit preoccupied with my journey - the flight from LHR at 0620 am presents problems that I am yet to resolve - will I arrive very early via public Transport or would it be best to take a cab in the dead of night - supposedly I need to be there 3 hours before my flight to Madrid!

The other worry is the possible problems associated with altitude sickness but I have checked these out and know to take it easy for the first few days.

Tomorrow I will pick up some local currency from the post office 'Soles' and I will have a booster jab for hepatitis. 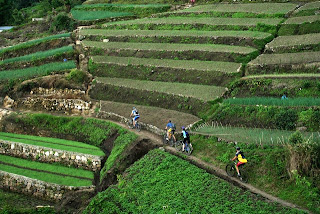 The other day I received a nice email and photos from a Adele, a friend I cycled with in Guatemala - hopefully Perú will have some landscape to match this.
Posted by malarkey at 19:16 1 comment: Links to this post 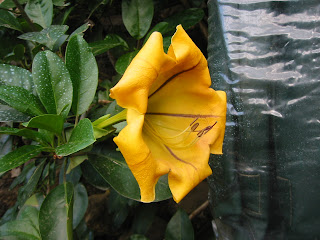 In 12 days, 19 October 2007, I will be setting off for Perú for 2 months. I intend this blog to be a simple record of what I see and do. Postings will be brief but I hope to add photos.

I will be leaving by way of London, Heathrow, then to Madrid and on to Lima. From Lima I fly to Cuzco.

For the first month I will be learning Spanish at Excel.

After that I will be working as a classroom assistant and English teacher in a voluntary program called Bruce Peru.

Well, that's enough to go on for now!
Posted by malarkey at 20:49 3 comments: Links to this post