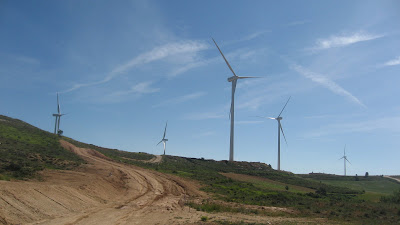 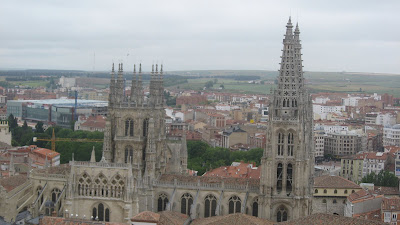 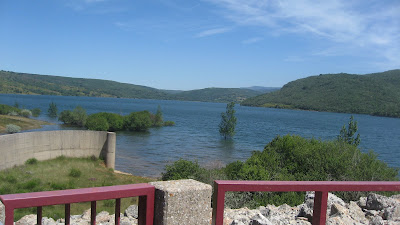 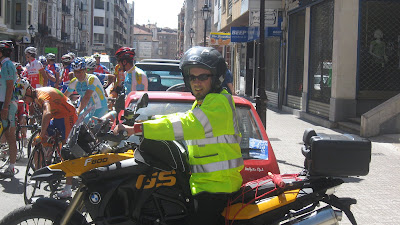 Perhaps one might think that Northern Central Spain has less to offer than the coastal regions - this is not the case and I can recommend the area. It is great for its scenic and historical qualities, the quality of the roads and the ease of cycling along quiet lanes and, even in the city where a cycle path follows the river to leave the city in either of two directions. Burgos is in the area of Castilla Leon and is situated on a high plateau. Thus it can be chilly even in summer. There is a local joke about the man from Burgos who went to a nudist camp but always carried a coat just in case!

I was in Spain for about 3 weeks and I managed to fit in a visit to Madrid and met up with friends there over 3 days before moving on to Burgos. This was for my second experience of Vaughantown. This is an immersion English course for Spanish speakers. Their English speaking counterparts or 'Anglos' receive 6 days of 4 star accommodation, food and wine in exchange for talking exclusively in English to a lively group of Spanish speakers, mainly corporate employees. They are improving their English speaking skills through intensive conversation. I reserved the subsequent 5 days for cycling around Burgos and getting to know the Cantabrian countryside.

As luck would have it a cycling group, Cycling-Centuries, an American company passed through the hotel en route with a group of Australians undertaking the Camino de Santiago. They had some spare bikes on board the support vehicle and rented me a pretty good hybrid with aluminum frame, carbon forks and mainly Shimano parts. I also managed a cheap deal with the hotel where I was staying. I can recommend it, a Hilton, Palicio de la Merced

Burgos is a historic city of some 200,000 people. It has a very well known Gothic cathedral and is situated on the Camino de Santigo, thus attracting many Peregrinos and other tourist.

My first day of cycling created some problems. A river runs through the city centre and there is about 5 miles of cycle path by it stretching each West and East to the city limits. Along one part of the path it gave way to an unexpected curb and I came off the bike suffering 4 significant abrasions. By luck there was a first a first aid station by a children's park so, like the children, I put on a brave face, wiped my tears and I was able to receive excellent treatment almost immediately. Riding out of the city a cyclist passed and waved as he went by so I caught on the back of his wheel and he showed me a good circular route out of the City. He was pretty fast but willing to pull me along and shield me from the wind. Rodrigo was a member of the local cycling club and he told me about some races over the weekend. His cycle club is phenomenal by UK standards, situated in a bar called the Burgos Cycle Club it comprises a very large room set out with photos and trophies. That weekend the club had sponsored 2 races at semi-professional level with some local teams and prizes of around £100 for the winners. I watched the start of the first race. There were a disappointing 50 starters considering the escort of 7 motorcycles and 4 or 5 support cars. The motor cyclist shown is in fact Rodrigo!

Cycling around Burgos is demanding. In one direction there are fairly steep climbs while in the other there are long drags. The wind is a constant and strong feature and one is reminded of it by the many wind generators. Spain is further ahead of other European countries in renewable energy but for cyclists these structures usually signify a demanding climb up to a ridge and a fierce chilling wind.

Mostly rides can be punctuated by rests in small villages where there is often a running tap of clean and cool fresh water. There is usually a cafe and opportunities to buy coffee, tapas and other drinks. At one such stop I managed to ride off leaving behind my camera, driving license, money and phone. Realising my mistake after some 15 km so I turned back. After 10 km I was flagged down by the Civil Guard in a squad car! They had been out looking for me to return my possessions after an elderly man who I befriended at lunch reported my error – I was so relieved that I collectively forgave the Civil Guard their history of support for the Franco dictatorship and set off agan to complete my ride. The extra miles gave me a 90 mile day and I was pretty tired at the end.

Cycling in the area is very agreeable; cars pass by carefully and give as much room as possible. On the main roads there is usually a metre wide margin for cyclists and there are plenty of other cyclists at the weekend, always offering a friendly wave. Over the 5 days I covered about 350 miles usually at an average of about 15.5mph which wasn't too bad considering some meandering exploration of villages and the cycle path which was always busy with other cyclists on their way to andd from the town centre. I enjoyed some beautiful scenery, views of lakes, mountains and the expansive sierra. I saw many animals including a stoat, lizards, a snake and butterflies. Bird life included birds of prey circling above reminding me to drink more water in the dry heat of midday.

In all this area offered some great cycling and is well worth a visit. Afterwards I rented a car and headed off for Oviedo in the Asturias, another great part of Spain. We stayed at Hotel de la Reconquista which has 5 stars and is worth every one of them!

There will be a few more photos over at my flickr site and i have added some relevant links to my blog page.

I am happy if you leave a comment
Posted by malarkey at 22:59 8 comments: Links to this post