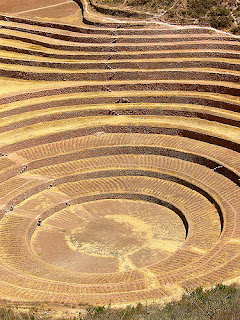 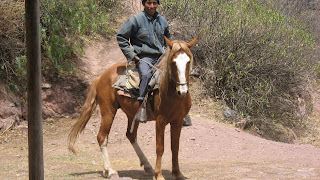 Over the last few days I have pushed myself quite hard with physical activity. On Saturday a group from the school went to a place that is called little cusco in Kechwa (Huchuy Qosqo). This meant a ride in a bus followed by a steep climb of about 1000'. At he halfway point we met a man on a horse. It was previously wild having been caught lat year and this was its first outing up the hill. Wen we reached the top and some ruins we were greeted by a very friendly young man who lived alone on the mountain. Retuning in a shared taxi we were frightened to death by our driver, particularly when he braked for a dog.

The next day I hired a bike and guide and we went to Moray and some salineras. Unfortunately I forgot my camera battery and missed some great photos. Moray is a huge, mainly circular set of agricultural terraces built by the Incas, said to be experimental with individual micro-climates at different levels. The salineras are about 1000 or more salt pans situated in a valley with a natural system of feeding salty water from a spring into wells with porous walls whereby the sun evaporates off the water leaving salty deposits for use in agriclture.

Some of the ride was easy but we went through some technical sections, both had impact punctures but had great fun. On returning we got off the bus above Cuzco for an exhilarating descent only spoiled by the odd llama feeding at the side of the road!

Finally, yesterday I found a spinning class near my house and managed a 45 minute session. Interestingly it was difficult to raise my heart rate above 80% due to shortage of breath owing to the altitude.

A tiring few days but probably good training for a forthcoming caminata to Lares some hot springs over a 4,900 metre mountain!