I decide to take a day out of the city and travel to the town Tigre which is on the delta to the north of the city. I lost my way to the train station Retiro which given its hugeness was probably remiss so decided to curtail my aspirations to a boat ride and lunch visit. On the way a detachment of soldiers marched round the corner which seemed a bit strange. 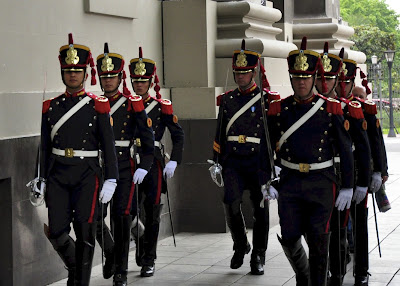 I opted for the train journey in two parts, the second via a coastal route. It wasn't possible to buy a through ticket but the first part to Mitre was only 15p although I was possibly short changed at the boleteria. The second journey, costing around £2.50 took the nicer two carriage coastal train to Delta station where it was possible to catch a public launch/water bus. 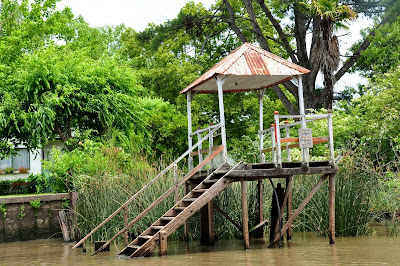 On on the Northern edge of the town Tigre lies the delta comprising a network of waterways edged with houses, some dilapidated but others palatial. Each has its own dock and they have evocative names like Amor, Amenecer and Media luz. I joined with locals and out of season renters and passed more than an hour weaving through liquid avenues, stopping to drop people off at their stilted houses eventually to alight at Bonanzas a restaurant and horse riding business and my lunch stop. 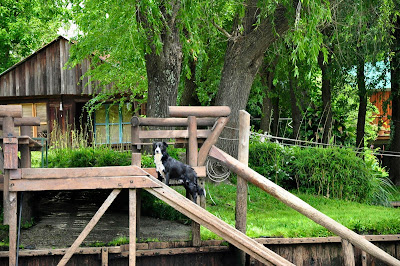 As the afternoon's only customer I had the royal table on the deck overhanging the river . I was served gaucho sized barbecue on a small charcoal laden individual parilla. It was loaded with portions of pork ribs, chorizo and chicken and I washed it down with an excellent half bottle of Malbec followed by ice cream and coffee. I had plenty of time to sit on the deck taking in the waterside tranquility and wildlife but resisted the lure of the hammocks.
Posted by malarkey at 01:10