I have been in Arequipa, Southern Peru 10 days now.
This is a great place. Generally quite clean and ordered and except for traffic fumes a pretty good environment. It offers a great deal for the passing traveller and more for its growing expat community. I seem to have had considerable luck and have been more or less fully occupied on some tasks and enjoying what is on offer for the last 10 days and have only just had time to start the usual city tourist trail having today visited the Santa Catalina Convent this afternoon.
My interim stay hostal, La Casa de los Pinguinos really couldn’t be better. Run by a Dutch woman called Alex it is safe, clean and better than many hotels. Alex has a young son and has moved to Arequipa permanently. There is a steady flow of travellers enjoying all the mod cons that you need at a modest £12.50 a night for B&B.
With the help of new found friends at Team-Inter mountain cycling club, notably, Henry, Jaime and Hans  I have bought a new and quite good quality bike with the intention of selling it on at the end of my trip. 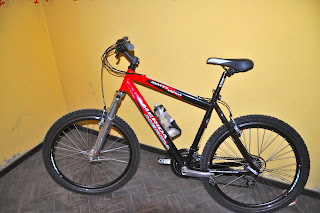 Last weekend we cycled to la Playa at Mollendo, some 120km. Setting off at 6am we first had to climb some mountains but overall to the coast we dropped 2,200 metres in altitude. So much of it was downhill. Generally the landscape was either lunar mountains or lunar landscape desert. Most of the ride was by road which was generally OK but the buses passed fast and sometimes very close. The last 25km was downhill off-road which was good except in places the trail gave way to 15cm deep volcanic ash, like riding in talcum powder.
Arriving around lunchtime after a stop for breakfast and a few punctures we were greeted at the end of the trail by one of the club members who had taken the road and bought a 6 pack to welcome us. From then on the emphasis moved from cycling to drinking and the following day we hung out at the beach before loading our bikes under a bus to be taken back. Generally it was sunny around 28C with a fresh onshore breeze and a was a really unexpected and memorable excursion to the coast.
Much of the rest of the time has been taken in locating an apartment. Short let furnished apartments in good areas are in short supply and prices seem high. After visiting 3, 1 located via an agency and the others through newspaper ads I have settled on a 2nd floor 3 bedroom apartment. This is really too large and will cost $540/month but it was the best of the bunch and in a very safe and quiet area – I aim to move tomorrow and maybe I can sub-let a bedroom.
Other than that I have joined some salsa classes which are offered by Christian in a smallish studio in the centre. These have been OK but the teaching is somewhat random at times and some of the moves are quite tricky. I have also been learning to play the Cajon with my music teacher Marta. She is doing her best with me but I feel she is unused to teaching cajon to adults – this is vacation time and many of the schools are dedicated to making money selling courses to occupy children.
I have been chatting to Chad and Johanna a young couple from Michigan aiming to work here for a year – they too have been preoccupied with finding accommodation and have been industrious in seeking apartments but as yet with no conclusion. Johanna is a break dancer (and other things) and has been encouraged into offering a workshop to locals. She has great skills and has opened my eyes to how formalised and athletic is as a style of dancing. They are both friendly and able young people in search of a moderately different and adventurous experience.
Arequipa is probably overall the nicest city I have visited in Peru. I would wish slightly fewer tourists but the altitude and the weather is fine and people are very friendly. It has its dodgy side with stories of assaults, express kidnappings, some drunkenness and prostitution – I saw a man last evening walking along the street with his dick in his hand but I think he was habitually drunk and possibly disorientated rather than exhibitionist. I was also offered the services of an attractive and rather plump young man, but apart from this I haven't been hassled and generally felt safe. It is very beautiful and from some views is dominated by the presence of the Volcano, El Misti.

This blog has become kind of my bedside book. Thanks Alan, very comprehensive description of the journey, it looks like a travelling novel :-)