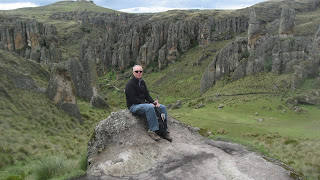 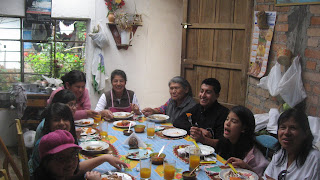 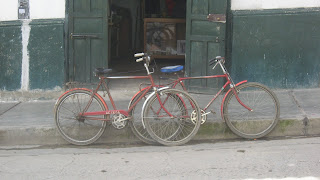 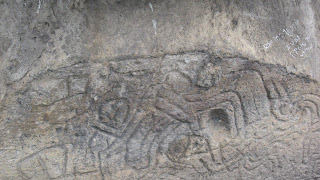 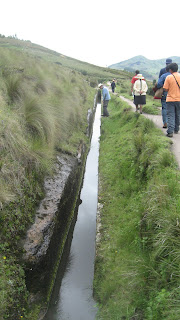 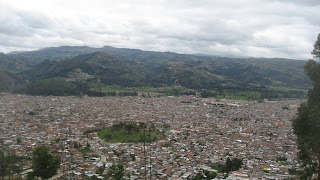 After leaving Lima I traveled overnight on Cruz de Sur to meet my friend Anna and her sister Lesley from Piura. The bus was very comfortable and I managed to sleep 7 hours, so arrived fresh and spent a very agreeable few hours comprising of cocktails, a lunch of duck with rice (a Chiclayo specialty). In truth the duck was a bit dry but we enjoyed catching up and we took in some pleasant gardens set out in Roman classical design and paid a visit to Ripley, the Debenhams of Peru and air conditioned.

The next day I was booked on a Linea bus,(I have since learned the buses are on strike) less comfortable but with some great views of the countryside. The journey of about 150 km took 7 hours giving you some idea of the terrain as we climbed to more than 11000 feet. At times the paved road gave way to dirt and some of the edges were just bit on the close side. Anyway, as we dropped down from the high plateau I had my first view of Cajamarca, a substantial city situated in a green valley surrounded by mountains on all sides, some of which were cloaked in cloud, for it is the rainy season.

Cajamarca has many attractions but it is mostly known for the downfall of the Inca Empire as Francisco Pizarro with about 170 soldiers, 29 horses and one canon conquered a culturally advanced empire stretching from Columbia to Chile. Atahualpa, the Inca Emperor was tricked into entering the city with his retinue which was duly massacred by the better armed and ferocious Spanish contingent. He was then held ransom for gold and silver to fill a large room (the Rescate) but his only gain from this was to be spared death by burning and he was eventually hanged. From then on the empire fell into disarray and was decimated by systematic subjugation and the spread of disease – and so it ended.

Arriving in Cajamarca at first I stayed in a hotel but by luck I have found a lovely family with whom to lodge. Vicky is an official guide and her extended family live in 3 connected dwellings. Mirita cooks and keeps house and cousins, aunts, nieces and nephews come and go so the house is always lively and fun. I am treated a bit like visiting royalty but am normalising relations and I have just got them to stop calling me Senor Alan. I get a room of my own, a shower next door and 3 meals a day for about £52 a week. To be honest I probably spend more than that on food alone at home.

Since arriving I have participated in some of the usual tourist activities. Firstly visiting some museums and the Rescate which is where the gold and silver was stored. I have also been to the Inca Baths, a complex of hot springs serving a complex of individual bathroom where for just over £1 you can spend 30 minutes bathing and absorbing some of the minerals said to be present in the waters. I also walked to Otuzco via a river path. Here one can visit the ventanillas, a complex of burial chambers niched out in the rocks. Yesterday I visited Cumbe Mayo a huge outcrop or 'forest of rocks with a 3000 year old aqueduct which has been precision engineered to supply water into the valley. There are also strange petroglyphs which so far haven't been deciphered.

The town of Cajamarca is busy and well supplied with places to eat and drink. Holanda Ice cream company takes advantage of the ample supply of dairy produce and has some great and typical Peruvian flavours. So far i have not had any luck in tracking down a NGO to work with but I think I have identified a Spanish teacher and I am supposed to be meeting up with a TV reporter who says he will interview me about cycling; on which not as yet I haven't bought a bike but have joined Fitness First and will be doing a spinning session later today.

Ending this edition on a slightly sour note I was robbed in the market losing about £30 and a couple of credit cards. In part at least this was my own fault in not taking sufficient precautions but the team that robbed me were pretty accomplished and I guess one can learn from any experience. Reporting the event has been somewhat comical necessitating several visits to the police station and back and forth to the national bank. Getting me a supply of money and plastic is a chore that has sadly fallen to my resourceful wife.
Posted by malarkey at 22:15