Visit to Pachacarmac and signing out from Lima 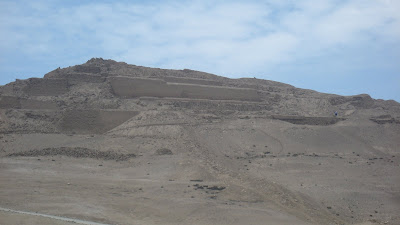 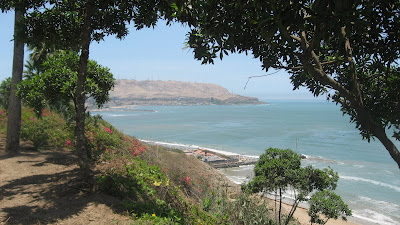 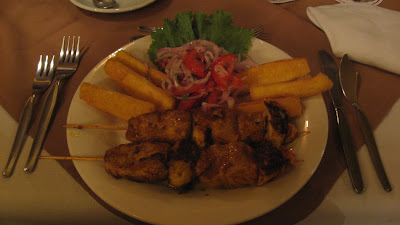 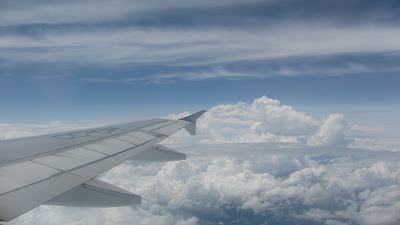 My last few days involved flying from Tarapoto and from their finding my Hotel in the bohemian district of Baranco, Lima. I had elected to stay in a reasonably plush hotel and even had the benefits of a jacuzzi. The flight to Tarapoto was slighly delayed but we had the benefit of some wonderful cloud formations.

Baranco comprises more than I had time to visit but it has some fine and grand older residences, some bars, discos and plenty of restaurants. The area has bags of character and some fantastic views of the Pacific Ocean. You can just about walk from here to Miraflores, and the higher coastal route takes in some very expensive ocean-view apartment blocks. Muchachas (female help for the rich) walk their owner's dogs and entertain their children on the grassy embankments; the cosntrast between rich and poor in Perú are nowhere more obvious than here.

My evening meal in a Baranco restuarant was very tasty. I ordered mixed seafood anticuchos. Generally these consist of small pieces of grilled skewered meat. The meat may be marinated in vinegar and spices (such as cumin, aji pepper and garlic), and while anticuchos can be made of any type of meat, the most popular are made of beef heart (anticuchos de corazon). Anyway, mine were sea bass, octopus and prawns and really good.

The next day I visited Pachamarca. This first entailed a bus to Surco, then another on to the ruins, about an hour in all. Surco is a middle class enclave with lots of large consumer outlets and fast food places. It has a small but quite entertaining park with pedalos and an original narrow gauge railway, Tren del Parque de la Amistad, Surco- Lima. It is well kept and there is an arts comlex where I noticed children practising the famous Marinera dance. If you have young children this park would offer an entertaining respite form more well known tourists attractions.

Pachacarmac is a very extensive Pre-Inca and Inca ruin. I have provided a link to an archaeological project that gives some sense of it. There is a great museum and you can walk or drive to the various parts of the ruins. The scale is impressive offering an idea of the kind of society that existed here before the conquest. I hired a guide. Top tip for language learners is $6 spent on a guide to talk to you in Spanish is a pretty cheap conversation and listening opportunity.

I am afraid that the remainder of my stay in Lima was fairly frivolous. In the evening I met up with my friend Sergi who I had met in Tarapoto. He was bound for a 'hot' month in Brazil and even managed to pick up a girl in the bar where we were. In fact I opened the conversation with her and after some while left them to it. On the way home I was offered sex and drugs but declining both mentally terminated my Peruvian experience for this year.

The journey home to UK was long if uneventful and eventually I was pleased to be standing in the chilly night air of Heathrow Airport. I was collected, by my wife and daughter, Jennie. I was somewhat tired but pleased to be home after what has been an incredible 2 months in Northern Perú.

I doubt that I'll blog for a while now but will continue to write on any interesting London/Perú activities and trips to Spain; and occasionally completely off topic. I am always appreciative of comments and welcome followers here or on Twitter for which there is a link on the blog. I will also upload more photos to Flikr in the next dew days

Sounds like a great trip. The pictures are fantastic as well.