He has a social life 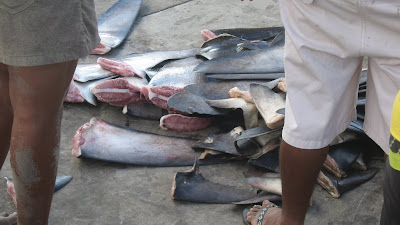 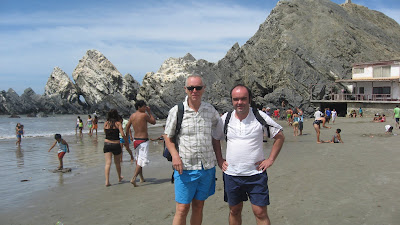 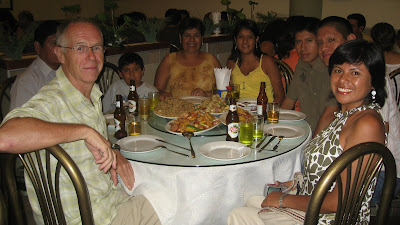 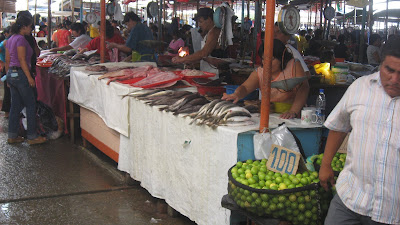 I have been so lucky with my contacts here in Piura and this weekend was busy and enjoyable. On Friday evening I joined a mass in memory of the death of Anitia Goulden, founer of the children's home in which I volunteer. It was good to see them turned out in their Sunday best and I later joined them for dinner.

On Saturday morning I decided to explore the Piura market. I had previously been put off by warnings of danger but I am sure it is no more dangerous than London markets. I left my watch at home and didn't carry a rucksack and did not experience any problems. The market is extensive and it offers everything from octopus to haircuts. I didn't like the meat section and heaved a bit at the smell but otherwise enjoyed the sounds and the sights, particularly the fruit and vegetables that are so varied and fresh. As usual I was the sole tourist so received more than a few looks, usually just curios and friendly.

In the afternoon I met up with Sebastian Yoo, my fellow student and a volunteer doctor. We visited the children's home and he brought gifts of medicines which were well received. We then went back to his house for a Korean lunch and were joined by our teacher Shirley and her husband. The meal was excellent and we had friendly chats about the differences between our respective countries.

In the evening I met up with Ana and her family and we went to the Chifa Canton, and enjoyed a meal of varied treats not unlike chinese res.taurants in the UK The service was excellent, very clean and generous portions. After I had said goodbye I headed for my favourite bar where there was some reasonable entertainment. I was distracted by a group of quite well off older ladies who were out for a night on the town. Already quite drunk they made a fair imitation of a Mexican tellynovella and tried to involve me in their action – I resisted telling them that I am really quite timid and just a bit married.

The next day, Sunday, myself and Juan who I am living with, headed for the beach. By chance we met Ana and her family who had the same idea. We shared the journey to Paita where we parted. In the queue for the bus there was a bit of an argument as some people tried to push in and others shouted la cola! la cola! which means the queue; it that should be observed. Some of this bad feeling spilled over into the bus but eventually people settled down and we had a quiet ride.

At Paita Juan and myself headed for Yacila a small and pretty fishing port with some attractive rocks and a pier from which young boys were diving into the water. I had a swim and later we walked through a rock tunnel to an adjoining and quieter beach. It was all very crowded but Juan told me that the last time he wast there it was empty. I waited for a haul of fish to be unloaded and was sad to see that they only landed 3 bags of shark fins, presumably to sell for soup. The remainder of Sunday passed quietly and while writing I am supping my customary beer.

This was my last weekend in Piura and a truly memorable one. I will be sad to leave but I feel ready to move on and it will be good to stay in a hotel. I have a 17 hour bus ride ahead of me which I am not relishing. Owards to tarapoto, La Selva.
Posted by malarkey at 17:40