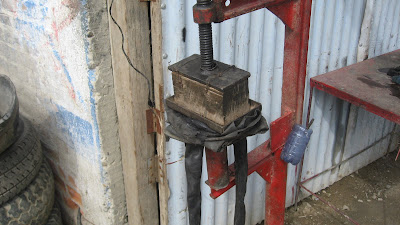 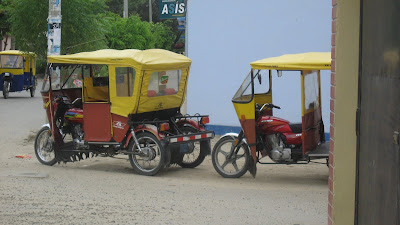 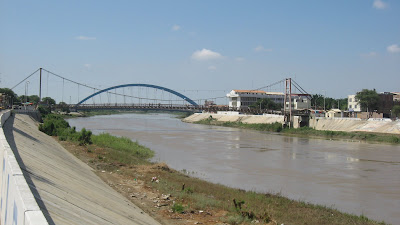 I have decided that I most enjoy the observation of the familiar in unfamiliar contexts. There is much to notice here in North Peru. The night before last it rained quite hard and the next day this was the topic of everybody's conversation. People were outside their houses and businesses sweeping away the mud that had been washed through. It struck me as not dissimilar to our reaction to snow in the UK. We all know it is on the way but we act as if it is a great surprise and are rarely prepared for its consequences.

Piura is dominated by a river and 5 bridges – normally the river bed, which is some 50 metres across is nothing more than a muddy creak. However, it rains in mountains during the summer and the river fills and sometimes they close the bridges. When the effects of el nino struck in 2002 some of the bridges were washed away and this gave rise to a new form of transport, the Moto Linear. Essentially these are unlicensed motorcyclists that at the time of the flood were more able to make their way across the muddy river bed. Now they form a noticeable percentage of the transport but are sometimes poorly regarded for their safety and potential for robbery. I am looking forward to the river being full as it will wash away all the accrued rubbish.

Very few people seem to walk more than 10 minutes distance – taxi transport is a cheap option and viewed as safer than walking, especially at night, but possibly this is debatable. The most obvious form of public transport is the motor-taxi, normally a 3 wheeled Honda motor cycle with a covered canopy – it is the favourite for a short hop. Most journeys cost between 1 and 2 Soles, up to about 50p but always ask the price before you get in and be prepared to take the next one – there is always a next one! As with the taxis if you look as if you are a potential customer they will beep at you. They maneuver into impossible gaps and sometimes don't have rear view mirrors. Also it is not unusual to see them transporting all manner of goods including, as I saw yesterday, 6 metre bamboo poles!

Hereabouts the yellow taxis are most often seen; they are small and generally you will notice more taxis than private cars – the cost is a bit more than the motor taxis and can carry more people, sometimes more than you would regard as safe. There is huge competition for trade but they have integrity and won't try and grab someone else's fare.

In most cities, including Piura, there are small 15 seater vans known as combis or colectivos. They run a set route which is usually posted on the side of the bus and they are cheap with fixed and reliable prices. If like me you are around 6 feet tall you need to select your seat carefully as available leg room is for people of more restricted growth. Combis will stop to pick up and drop you wherever you want and if they see a likely customer walking across the field a 100 meters away they will call them to hurry in order to win the fare. There is no timetable for Combis or local buses but in Lima and Trujillo they were unofficially regulated by boys who received tips; they would note the time gap between different drivers on the same route and relay this information to them – the value of this was to optimise the time between the preceding transport in order to find sufficient passengers to make a profit.

Buses and motor cruisers run fixed routes, the latter often operate by night and it is worth paying an additional $5 for a first class with more comfortable and reclining seats. Arriving at a bus station early in the morning in an unfamiliar city with taxis competing for your trade can be a bit harrowing and you need your wits about you.

Other modes of local transport include bikes, sometimes 3 wheelers with carts in front, donkeys and carts and of course there are delivery trucks of all sizes and types. As a cyclist I have found that the experience isn't as dangerous as it may seem and the the attitude towards cyclists at least benign unlike the in UK . Where there are rules of the road, like traffic lights, they are studiously obeyed but few if any road users understand the concept of lane discipline. As you can see punctures cn be repaired at the side of the road.

I suppose in I am left with the conclusion that this growing economy (5% last year) is growing its transport use accordingly. The availability of cheap natural gas means that that some concessions to pollution are being made by the conversion of a few taxis. The emergence of a middle class and the now relatively common site of the Chelsea taxi means that there is a ready demand waiting to be filled and I have recently seen a Yamaha outlet selling Cuatrimotors those horrible 4 wheel drive buggys that seem to be so popular in Spain.
Posted by malarkey at 17:12

If you're going to be in the north some time, then think about visiting Chachapoyas - you're very welcome to visit the language school I run there. Have read this blog for a while, and only just noticed you're from Addiscombe, where I have lived, temporarily - small world.

If you're going to be in the north some time, then think about visiting Chachapoyas - you're very welcome to visit the language school I run there. Have read this blog for a while, and only just noticed you're from Addiscombe, where I have lived, temporarily - small world.

Have signed your guest book Vanessa, hope it got there, Alan

I thought not - it seemed to reject the posting. I am going to Tarapoto on 6th and using it as a base to explore a bit more la selva, then heading back to Lima 17th via flight from Tarapoto

We are missing you Weds mornings Alan, but I am enjoying reading your blog. I've also been inspired to start my own!