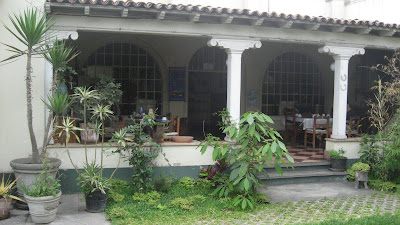 In all probability the normal can seem less so when set in the context of 24 hours of wakefulness and 14 hours of flying. Leaving Croydon a t 3.30 am after scraping the ice from the windscreen my kind driver had a nose bleed and we decided I should drive to Heathrow. 2 flights and 21 hours later I arrived safely at 'Home Peru', my hostal in Lima. The journey was relatively uneventful but the Iberia Airways staff were typically laconic and at times rude. I had to put up with 2 sessions of their musica navidena which included favourites like Sing Hosanna, Green Sleeves and a Spanish version of I'm Dreaming of a White Christmas!

On reaching Madrid I paid 9 Euros for a modest breakfast which with Pound Euro parity seemed somewhat steep. In London I had chatted to a lady who was off to Colombia to spend 3 months in South America – on meeting her later she was obviously distraught and had been crying. She explained that a cash machine had eaten her only bank card and she had no other funds. Luckily she was being met by friends in Bogata but even after a 40 minute call to HSBC they couldn't offer her any useful advice. I felt sorry for her but perhaps she needed to have planned for such a contingency given the length of her stay. We talked about using ambassadorial services in Colombia but my guess is she could open a new account with a South American bank and have some money transferred.

On arrival at Lima we formed an orderly group waiting for our cases to be off-loaded – this took some 45 minutes but otherwise immigration was a painless experience. I was met by Pedro an amiable and helpful taxi driver and the ride of 35 minutes cost $14. By this time, about 8pm the traffic was light but notwithstanding he impressed me with his close formation driving and maneuvering between lanes. Driving in Peru is always a bit random and later I asked my friend Stuart for top tips for pedestrians. He proffered the need to assess the value of their car relative to your life, meaning cheap cars like taxis are unlikely to avoid hitting you while more expensive ones may think twice! My room and the hostal is basic but OK except the sound of the traffic outside is tiresome. For $12/day including breakfast and free Internet who can complain? After visiting the supermercardo I snacked on cheese, biscuits fruit and Cusquena cerveza and slept well until around 6 am, 11am in the UK.

Is it just me or does $14 for a cab ride in Peru seem kind of steep? The figure especially struck me as high once I read how little a night's stay in the hostal is costing. Anyway, glad to hear your trip there was uneventful. It must've felt surreal to have gone from winter to summer in 24 hours.

Probably was steep but the guy waited about an hour for things to clear and it seemed a simalar price to other transfers. You could probably pick up a taxi outside and it would be cheaper but ....... the intial security of someone with your name on a sign is helpful after such a long journey. I think my lessons will be about 12 us/ hour which also seems steep.