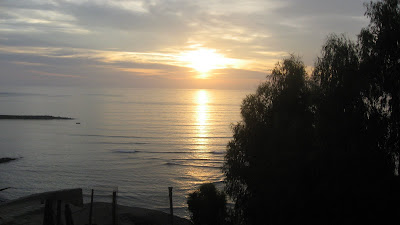 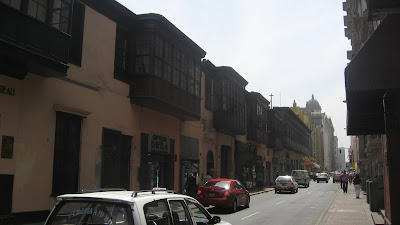 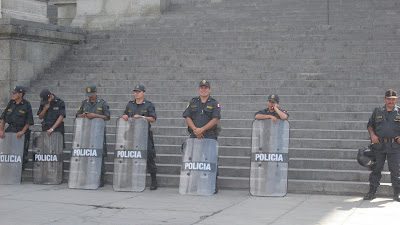 This was a day of full-on tourism. Stuart, my friend from Lima collected me at 9am and we took a bus for 1 Nuevo Sol (about 25p) for a 15 minute ride to the city end of Av. Arequipa. Once there we negotiated busy and dusty roads on our way to the Historical Centre.

My overall impression of central Lima is favourable. It is a real city, both commercial and historic. Although I only experienced a very restricted slice of life it felt at once slightly frightening but also charming and grand. It seemed as if the centre had been in a constant process of change with once fashionable districts now somewhat unkempt, their treasures corroding in the humidity, dust and pollution. At the same time some areas which had hitherto been very downbeat have now been improved, renovated with their historic treasures having been revealed and enhanced in the form of their colonial foundations and the greening of the surroundings.

One of the most striking features is the number of mansions in with ornate balconies in varying stages of decay or renovation. Stuart explained that these screened balconies had once hidden the faces of genteel women of Spanish descent, whose Moorish past had originated a tradition of wearing a sort of half hi jab with one seductive eye made knowable. From the balconies they looked down on the passers by maintaining discrete anonymity.

One of the largest squares contains the presidential palace. From here we were able to witness the changing of the guard, albeit at a distance. The guards, dressed in bold red and blue and accompanied by a pretty good band goose stepped and shimmied across a grand courtyard observed by a small and appreciative crowd. Riot police prevented us from getting too close to the action and the whole process, which happens every 2 hours took at least 20 minutes to complete.

We also visited the convent of San Francisco and although I am not too keen on religious building I was intrigued by the use of this one, housing as it did in many catacombs with the bones of thousands of souls fully viewable and macabre to the extreme neatly sorted and stacked in rectangular and circular vaults.

As you can see this was a day of touristic excess and later we also visited a colonial house with a medical library written in Latin and dating to 16 century. Later we had an excellent lunch including ceviche, marinated raw fish and the pisco sours a cocktail of Pisco a type of brandy, lime juice and whisked egg white.

In the late afternoon we visited a museum demonstrating the rich history of Peru dating back over several civilizations and evidenced by some excellent artifacts. We then went on to the bohemian district of Barranco and watched the sun go down over the Pacific and ending a great day with a couple of beers.

I was pretty tired from all of this and retired early with a glass of Peruvian red!
Posted by malarkey at 21:51

Wow, this was a textbook perfect day, in terms of tourism. You guys crammed a lot of activity into eight hours.

Regarding those buildings that you saw under renovation, did Stuart say anything about who is buying them up? Are there gringos investing in real estate in Peru or only wealthy South Americans?

Before the recession there was a lot of coverage in the news media about Americans retiring to Mexico, Costa Rica and Nicaragua or buying up properties in those countries. It sounds like many of those buildings you described have got "good bones" so to speak and once they are fixed up will be beautiful showcases.

Yes Eleena the buildings do look good an would be great projects. The restoration of the area seems a bit uneven and I wonder if there would be bureaucratic hurdles. Most of the big money seems to head for the coast and the city can feel oppressive in the fumes and maybe less secure than elsewhere

It's unfortunate how some older parts of the city are in various stages of disrepair.