Sofia and friends in London

I spent an enjoyable evening in Bolivar Hall close to Warren street underground station listening to Peruvian music performed by the small but talented group of Andean troubadours. Vocalist, Sofia Butchuck from Cuzco led the evening singing in Spanish and Quechua. She sang beautiful ballads referencing the sacred properties of the coca leaf, the indigenous people's god Pachamama and the natural world of mountains and the flying condor. She was accompanied by Santiago on guitar and Paloma on charango, a small 10 string guitar like instrument. She also sang songs with a political message focusing on internal struggles on mining concessions in Bagua and elsewhere.

Sofia's musical performance was followed by the that of Jose Navarro.  Jose performs a ritualistic dance of scissors and is a puppeteer an mime artist. The scissor dance is an acrobatic and, as can be,  seen highly costumed performance.

The theme for the evening held some irony since the recent bicentennial independence celebrations in south America pay scant attention to the 500 years of oppression of it's indigenous communities. Unfortunately the event was not well attended but this was more than compensated by its quality and ambiance. 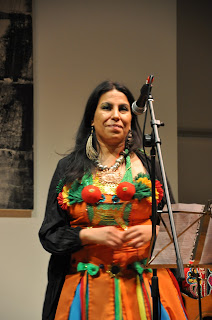 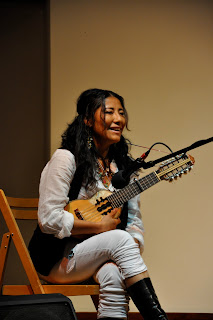 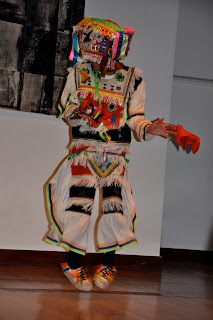 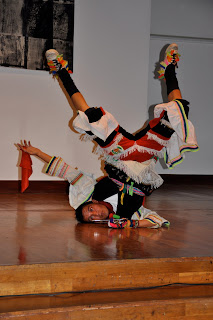